The Paramount Group Powered Up For The 2016 African Aerospace and Defence Show In A Big Way!

When it comes to projects, the bicentennial African Aerospace and Defence (AAD) show, held at the Waterkloof Airforce Base in Tshwane, is all about the large numbers. 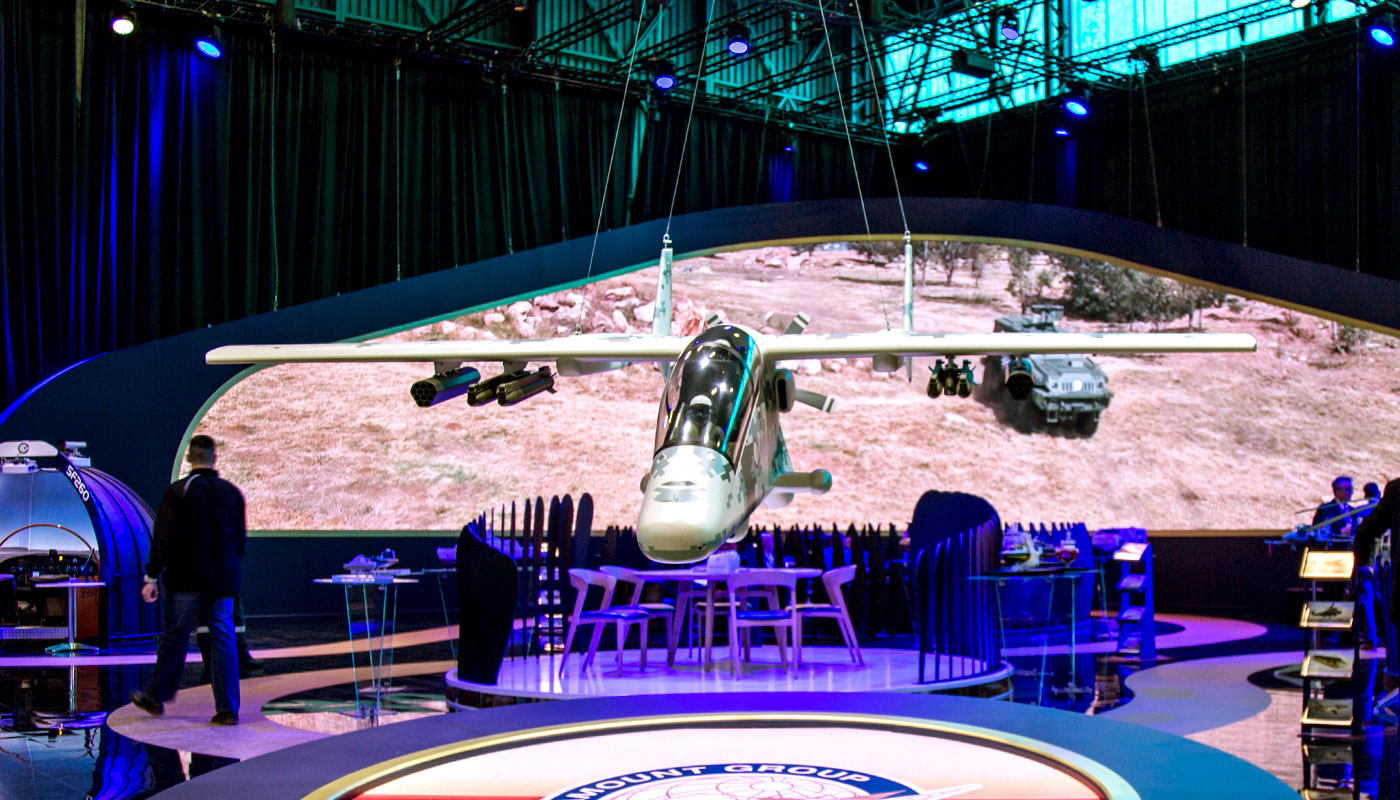 A ¼ model of the MWARI multipurpose aircraft. The model was built by an English model for R2 million.

To stand out in a crowd of giants you need to operate with a titan of a client.

Design a 1000m 2 exhibition stand (400m 2 interior and 600m 2 exterior) that demonstrates why the Paramount Group has grown to become a global leader in defence and aerospace, who is taking African technology to the world. The stand will need to be completed in 10 days and play host to VIPs as well as the public. 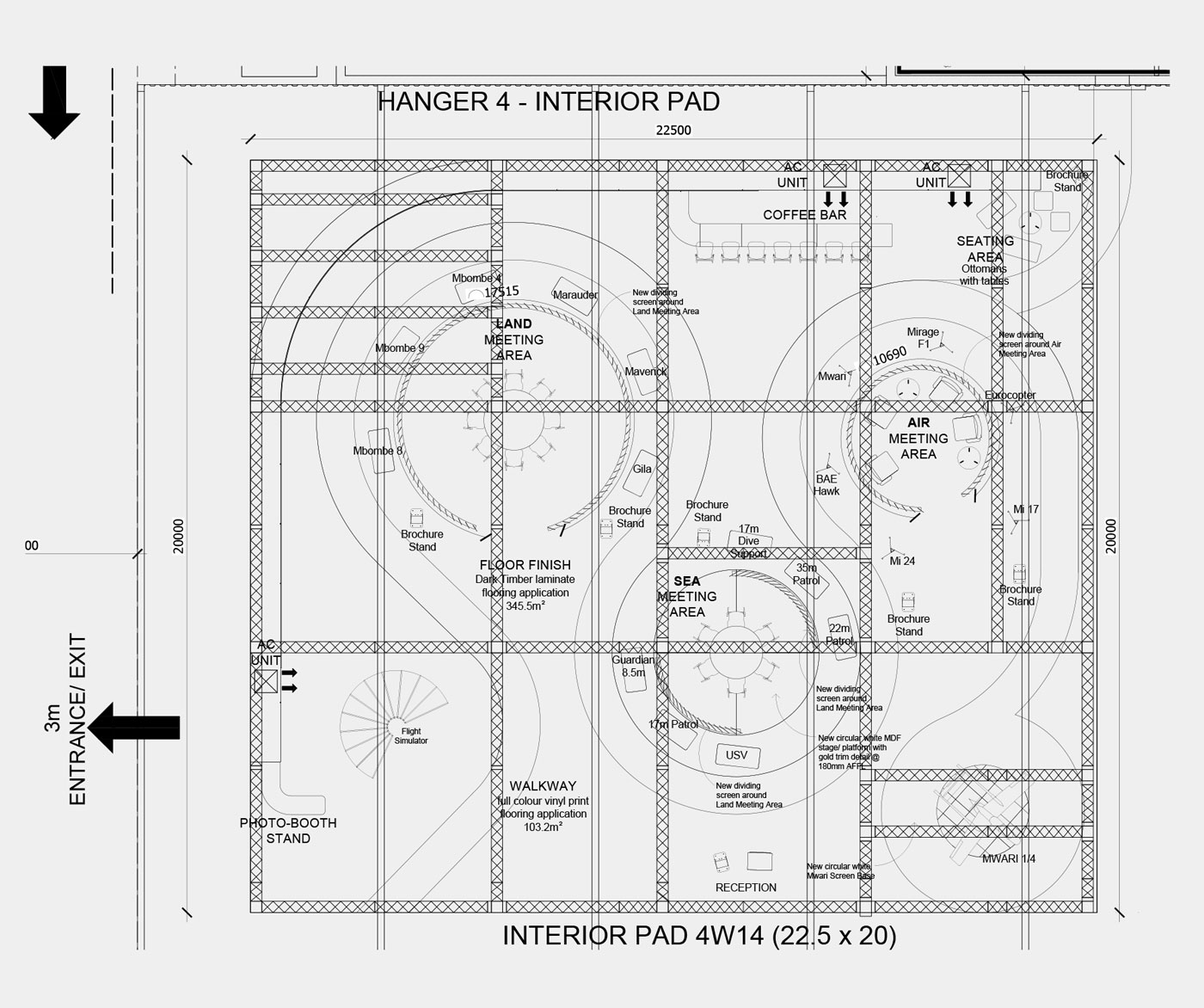 The floor plan for the Paramount Group had to incorporate exhibits from all of the holding company’s divisions. From the K9 training school to Paramount Naval Systems all divisions had to be showcased at the AAD 2016 expo.

Inside AB Design knew that it was important to pull together a cohesive a theme that could be carried across all the company divisions, but one that still allowed the Paramount Group to stand out. Having worked with the Group on their exhibition stands since 2012, AB Design was in the perfect position to deliver.

“The challenge we were confronted with when building this exhibition stand was to create an environment that gave the visitor a sense they were getting a sneak peak into the future.”

Starting with the interior conferencing area, the designers brought the comic book theme into the space by creating small, modern circular areas in the interior pad section of the hanger. These separate cordoned-off areas were designed to be used by delegates for trade meetings, and were divided by different arms of the Paramount Group. The meeting areas were framed by black propellers (inspired by the MWARI) to create privacy. A flowing decal on the floor helped to connect the spaces together.

With any superhero franchise the lighting of the scenes is important. The designers used a blue light to give the room a futuristic mood and providing talkability, like stepping into Tony Stark’s workshop.

To generate a truly unforgettable experience, and a literal sneak-peak into the future, AB Designs installed what was at the time Africa’s largest LED screen, capable of projecting 4K quality picture. The curved screen was framed by gold and was a design piece straight out of the comic book realm. The screen’s flowing lines conveyed elegance even though it was a beast to behold. 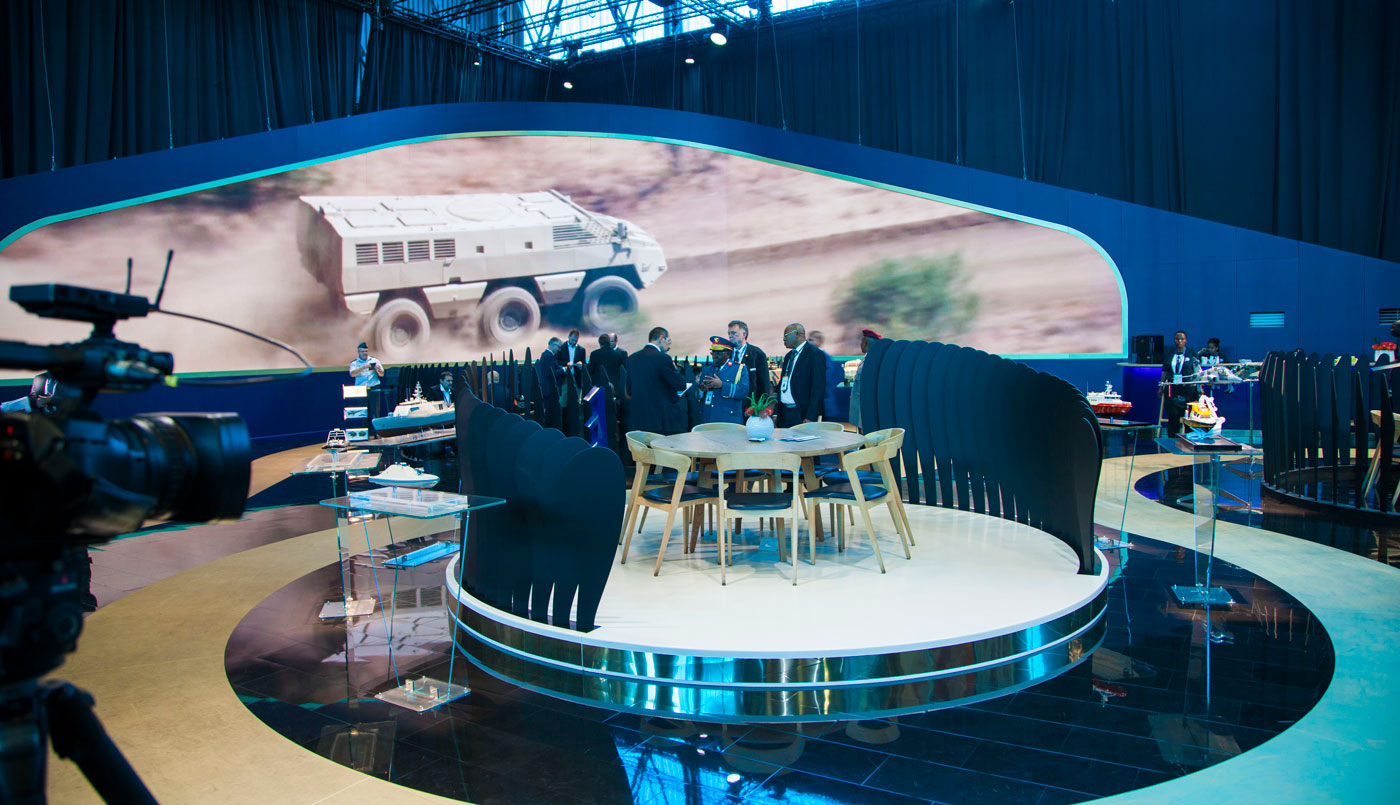 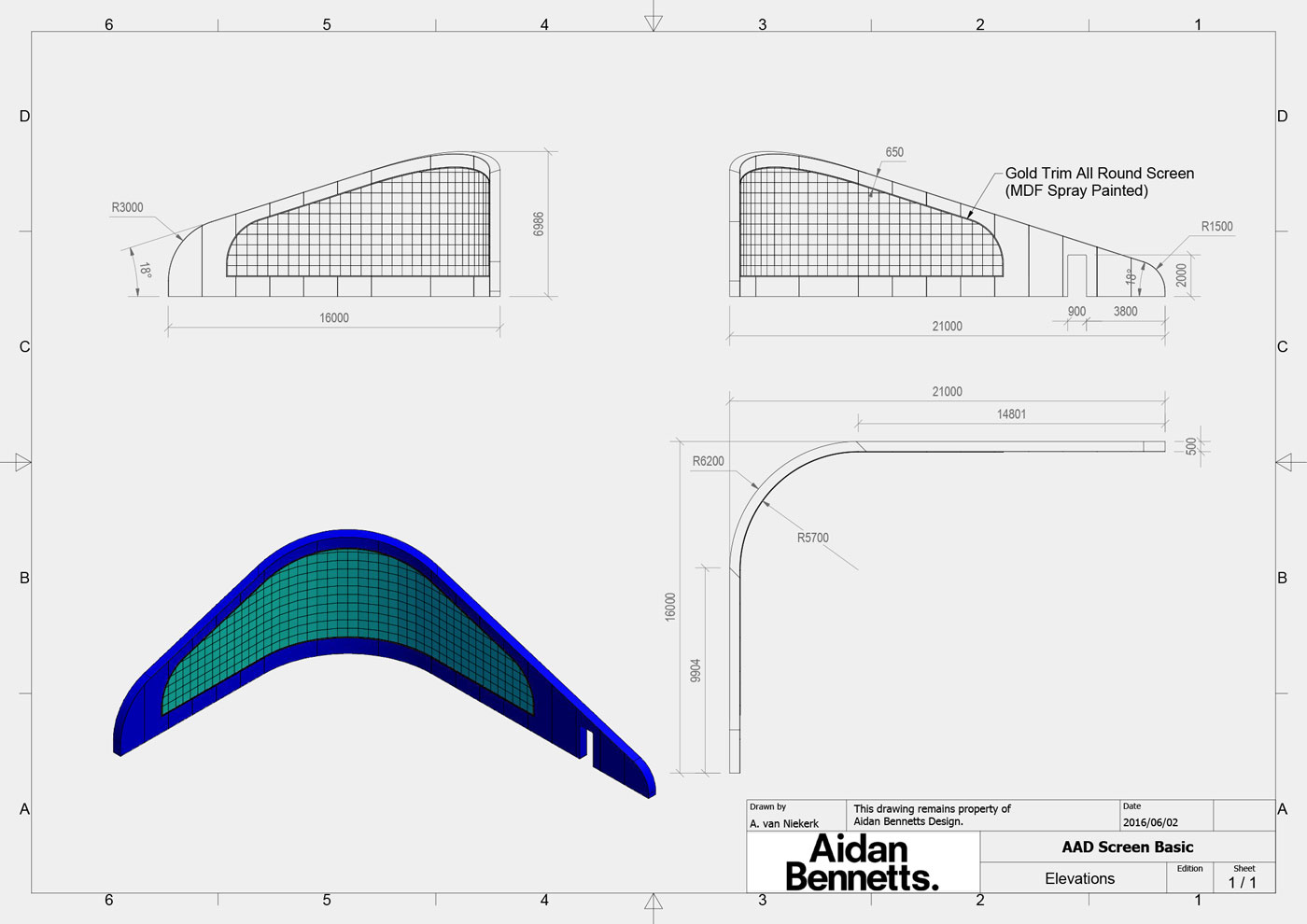 The focal point of the entire exhibition was the digital screen. To showcase the Paramount Group’s entire catalogue of products it was critical to display with the best quality picture.

Unsubtle details were the key to bringing the futuristic superhero theme across. Glossy surfaces, shiny metallics, the dramatic use of blues and grays. The bespoke countertop areas embodied these characteristics perfectly with their swooping curves, theatrical detailing, and bright contrasting colours. The end result was piece of furniture that could arguably have come from the set of a superhero movie set.

The star of the show for the Paramount Group was the unveiling of the Mbombe vehicle range, which included the Mbombe 4, 6, and 8.

Bringing the superhero design theme into the outside areas while maintaining brand recognition was going to be challenge, but AB Design was committed to providing the movie magic look that the Paramount Group wanted. Cue Parabot , an almost 10 metre tall robot that made its first appearance at the AAD 2014 show. By positioning him next to the Mbombe 6, the transformer character really helped to create drama and talkability.

Parabot standing next to his entire family of Mbombes for the first-time.

Also on display outside was the Paramount Group’s Anti Poaching Gazelle and the full sized MWARI. Earlier in the year Boeing and Paramount agreed to collaborate and create a truly multi-role aircraft, a major win for the company. Utilising the brand identity’s colour pallet again, there was no need to introduce a superhero element to the stand, as the vehicle spoke volumes for itself. 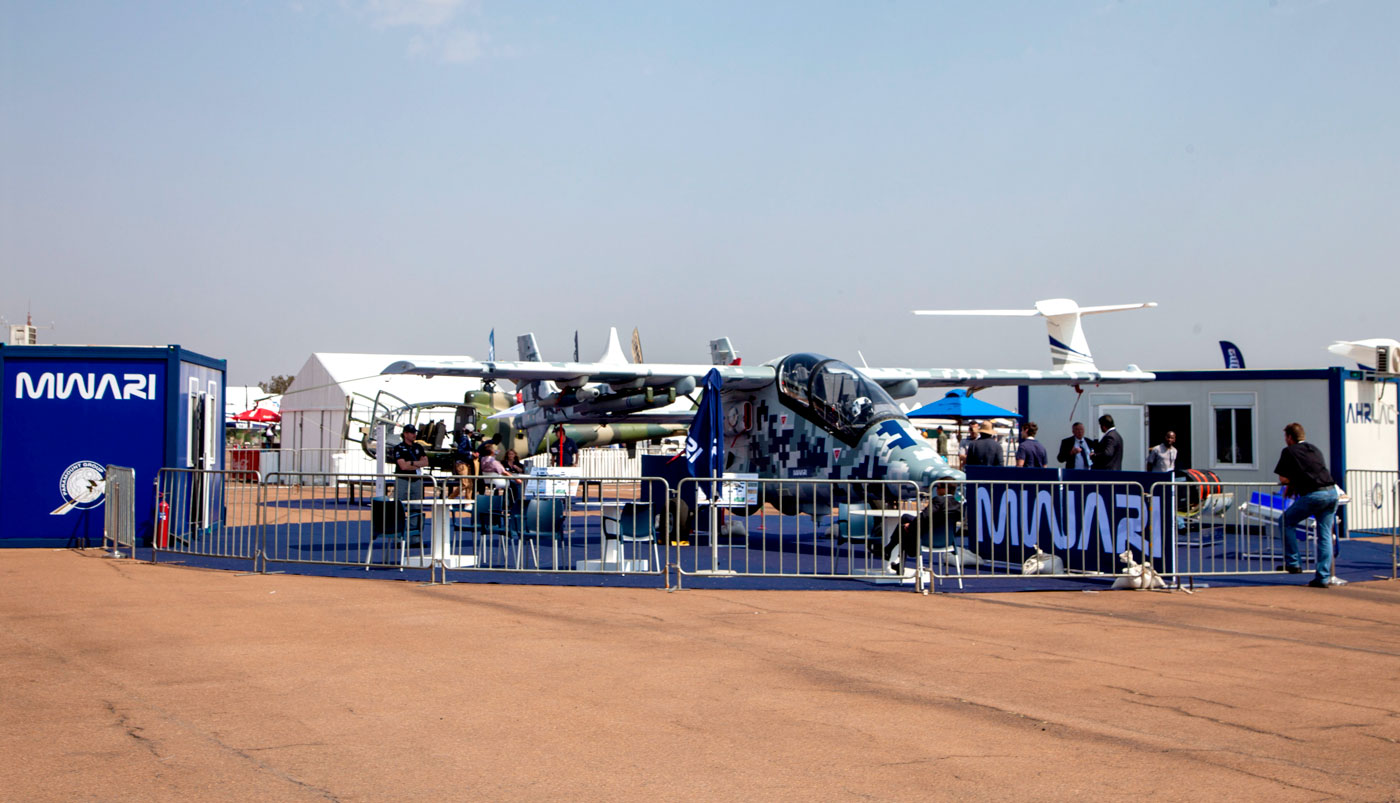 With AAD 2018 just around the corner the AB Design team is already designing and preparingfor the next show – which will be bigger and better. 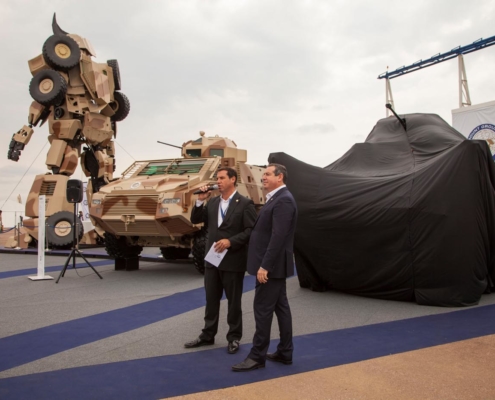 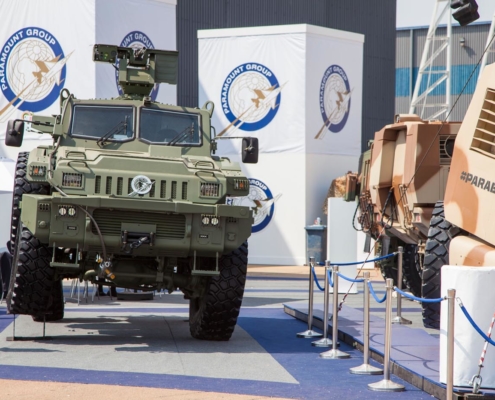 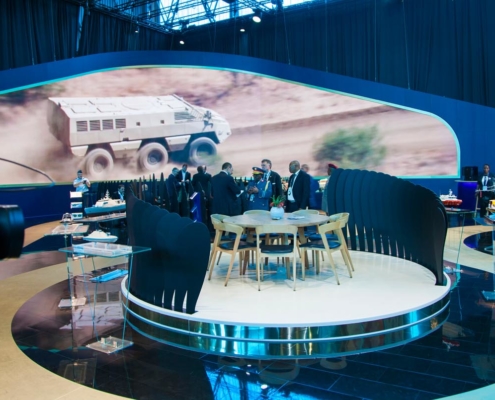 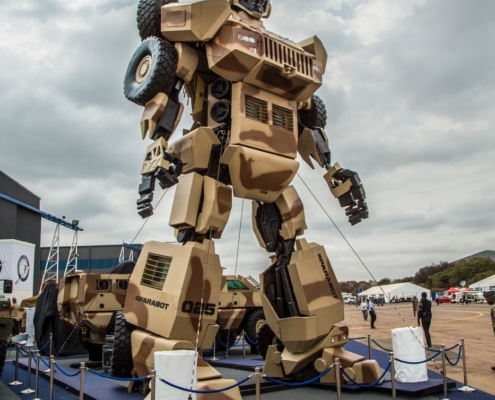 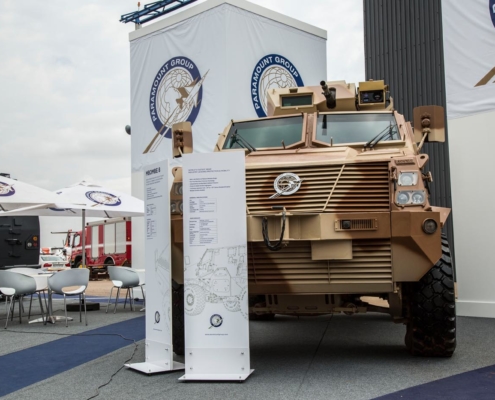 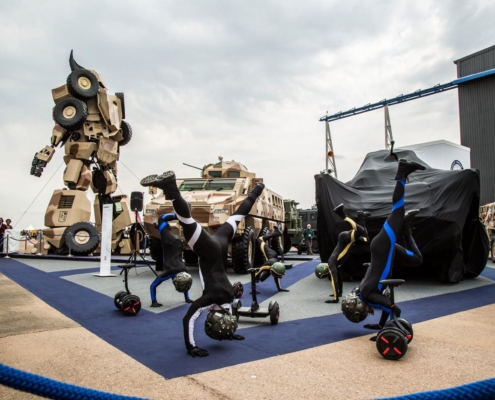 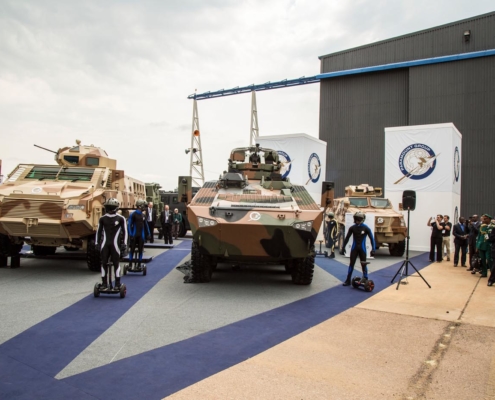 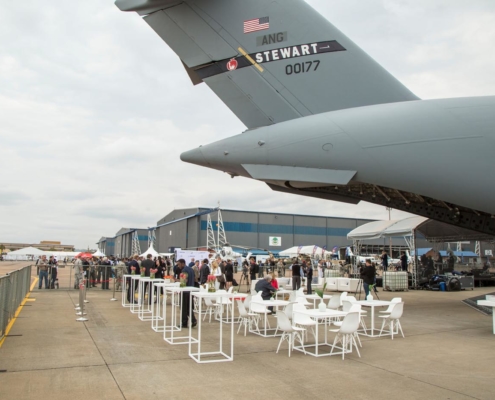 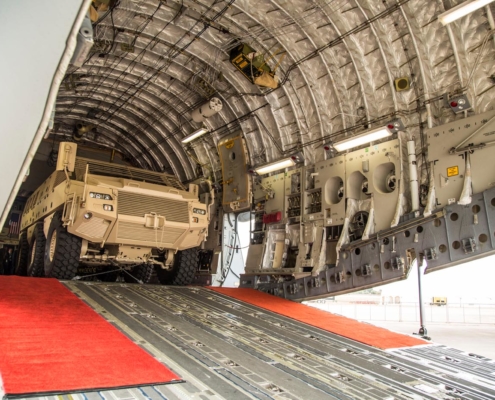 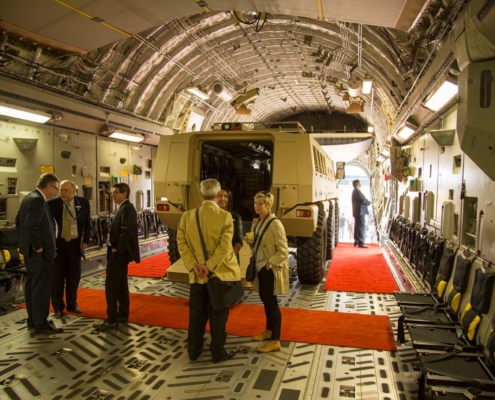 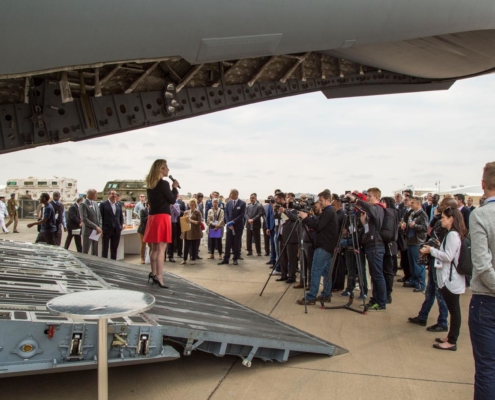 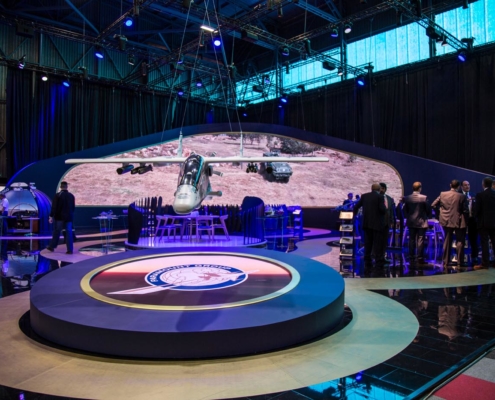 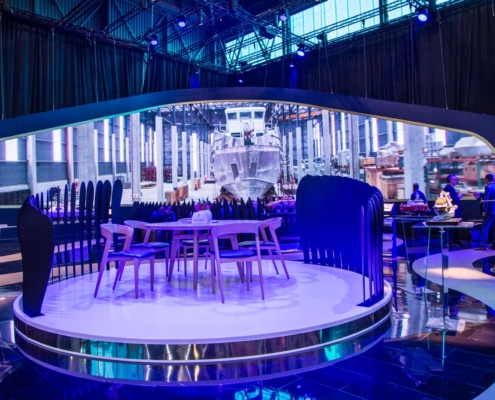 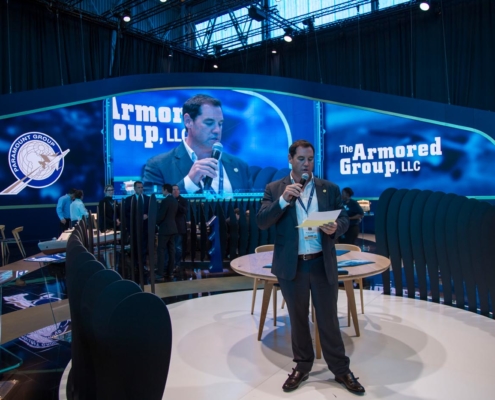