21st Century footwear phenomenon, Crocs, gets a makeover with fresh curves at its newest store at the Fourways Mall.

The thing about Crocs is that over the last 17 years since the company launched, it’s established itself as its own shoe category- not quite a sneaker, not quite a slip on but a Croc. With a presence in over 90 countries worldwide and having sold up of 300 million pairs since opening the first store in 2002, Crocs have become an iconic footwear brand that appeals to everyone from toddlers learning to walk, to master-chefs and celebrity surgeons. Comfort and durability aside, it’s their featherweight lightness, variation in style and every joyful colour of the rainbow as well as their affordability that has contributed to their stratospheric success. 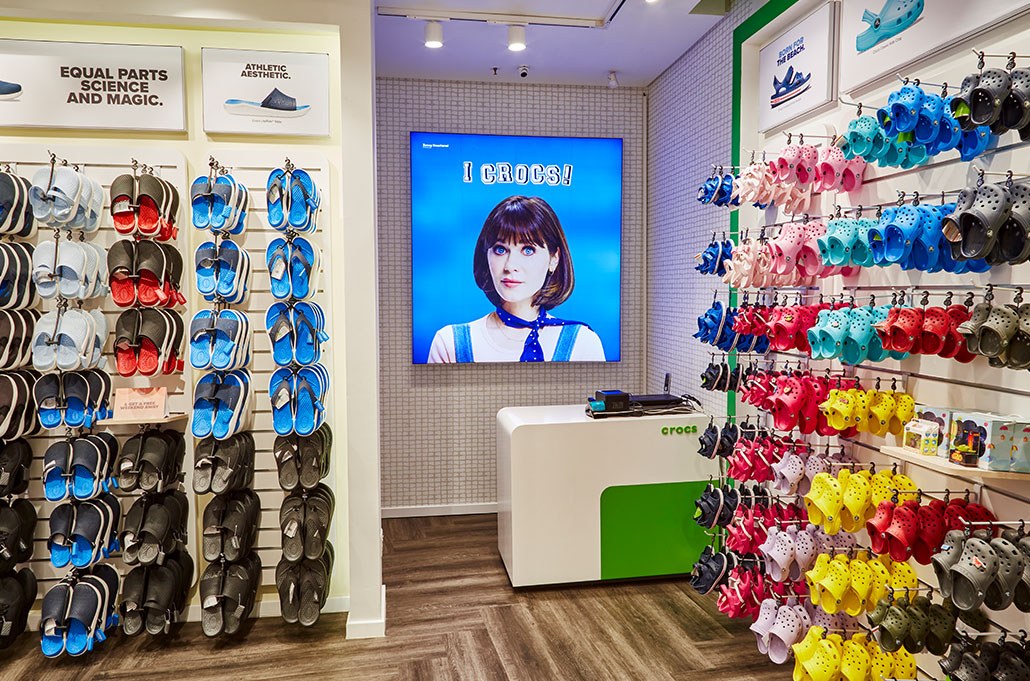 So when the brand decided to pull in the reigns for a more cohesive global rebranding of their retail look and feel, to launch their new store at the Fourways Mall extension in Johannesburg, they contacted AB Design to help interpret this and bring the brand into the next decade.

‘Crocs wanted to modernise their look, they wanted to create something that was a little bit more refined. Over the years, the store designs have been passed on to various agencies and have been slightly corrupted having lost sight of the design aesthetic,’ says Aidan Bennetts of AB Design.

The signature of the rebrand focused on the actual Crocs shoes, to use their design as the starting point for the retail fit-out. ‘One of the key fundamentals of the shoes is that they have no sharp edges and are very round and ergonomic,’ says Aidan, which the AB Design team translated into various touchpoints around the 73m2 space. ‘You can see this on the wall band displays, floor display units, point of sale counters and the ceiling, everything has a radius to it and all edges have been softened and rounded off to pay tribute to the shoes themselves,’ he says.

This goal proved to be the most challenging aspect of the design, according to Aidan, mainly because metaphorically it was like fitting a round peg within a square. ‘Generally speaking, building and construction materials do not like to be shaped round – anything from wood, marble, Corian is much harder to shape round than square. These materials are not naturally organic, nature does it incredibly well, but in a built environment things want to be square, so it took a lot of design thinking to be able to pre-design and engineer items with the right sub-structure to be able to accommodate the preferred shapes. 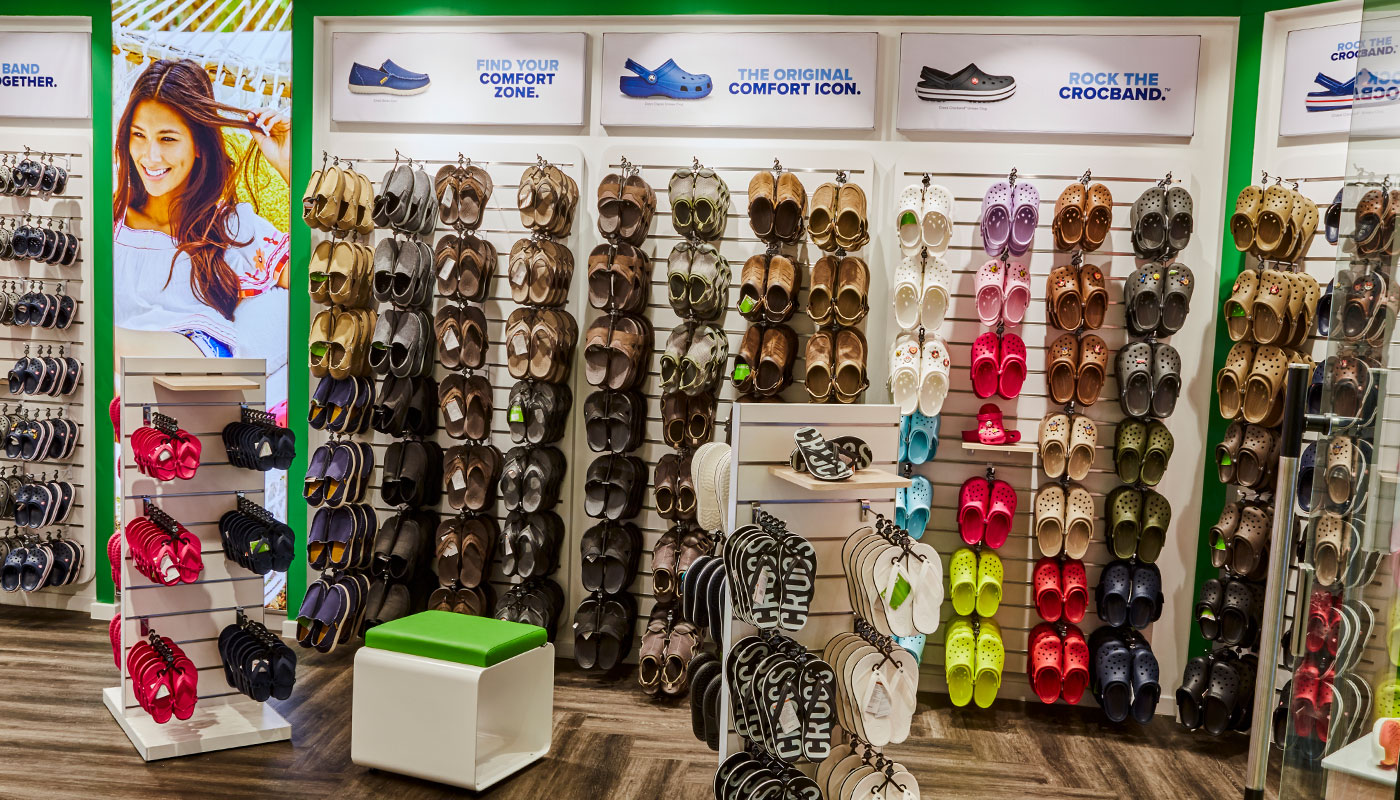 The next challenge came in toning down the deep green of the branding, difficult because of how distinctive it is. Says Aidan, ‘It’s a very striking green, which in previous store designs has been over used. Having said this, it’s become a very strong element in the branding that customers recognize before anything else. So with the new look we wanted to pair it back, referencing it as a highlight rather than a focal point.’ The AB Design team used it as an accent colour in subtle ways by programming LED lights behind unseen sections of green which had the effect of a washed green light to accentuate the product as opposed to painting everything green. ‘Instead of it being in your face, it’s almost there like a signature note of the design to remind the client where they are,’ he says. 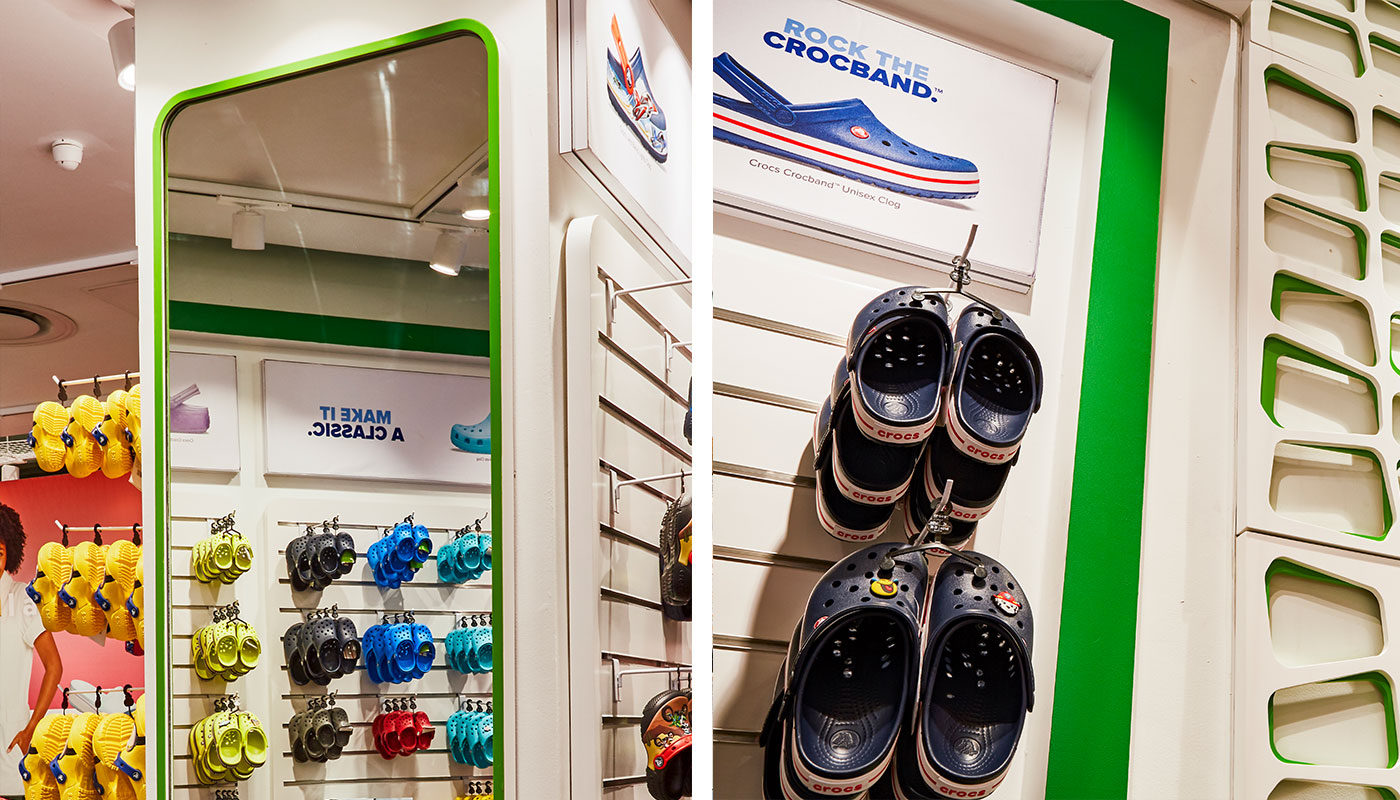 Upon its completion in August 2019, the Fourways store is both playful and colourful yet not overdone, a balancing act that is a stroke of genius considering that 700 pairs of brightly coloured shoes have been incorporated into the space. ‘We had to be mindful of how busy the space could get therefore we paired it back with a white minimalistic background so the product does not compete with the store. We took detailed measurements of the product and laid them out in various ways, so we would have enough space for each item to be represented on its own,’ says Aidan. The result is a store that allows for a seamless customer journey that’s easy on the eye, where the stars are the shoes and all the values they’ve become renowned for- comfort, reliability, affordability and most of all joyfulness. 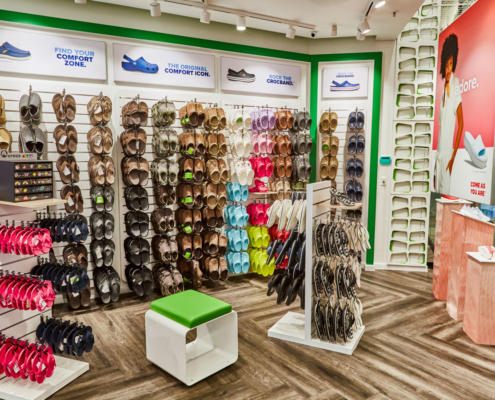 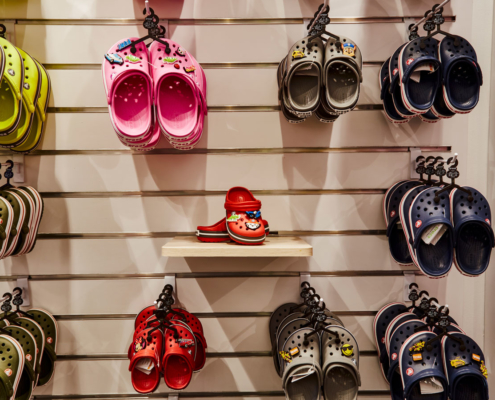 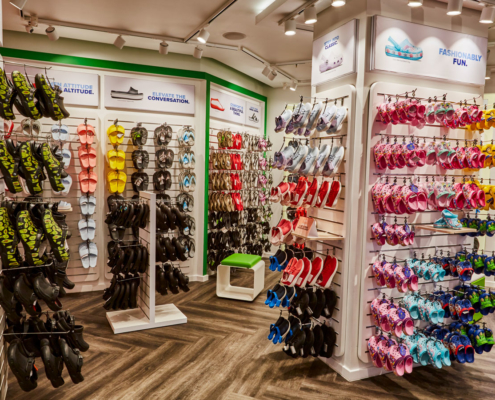 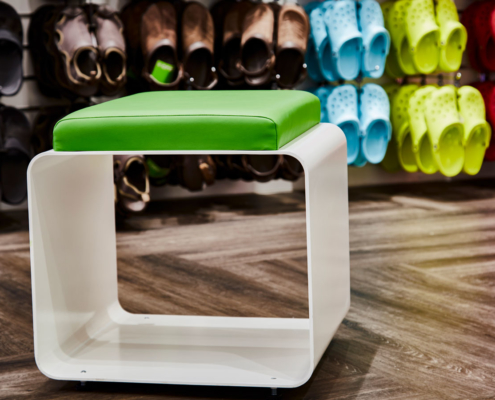 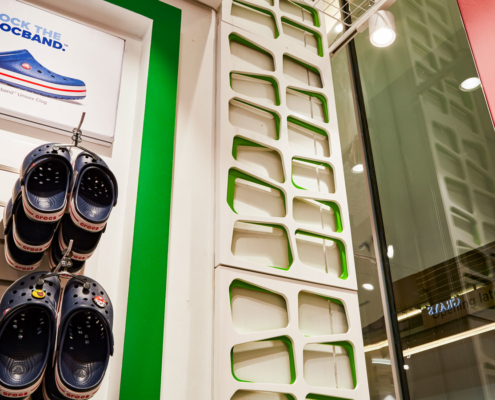 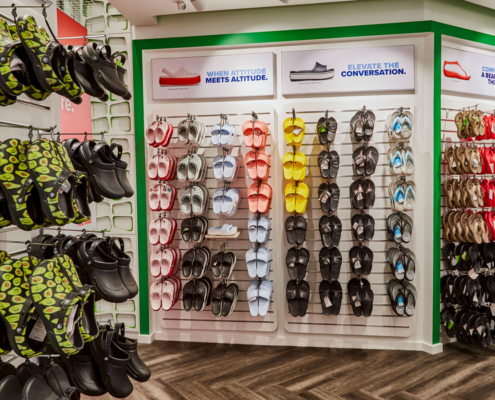 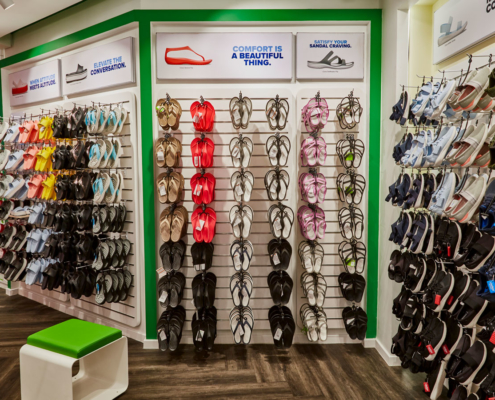 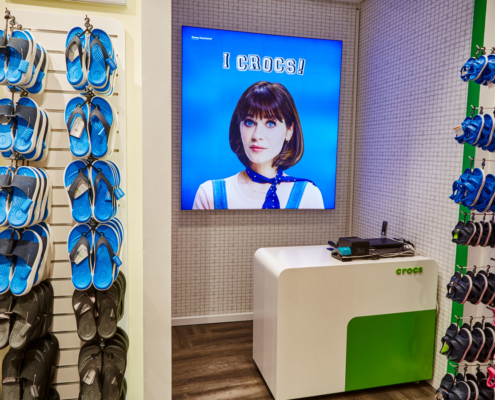 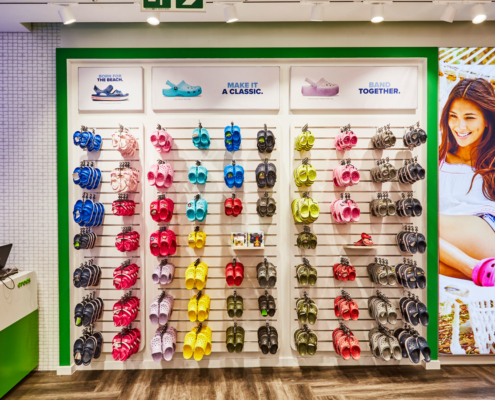