New Offices for a New Era

A Design Overhaul for the Democratic Alliance’s New Campaign Headquarters

When AB Design received a call from the Democratic Alliance (DA) asking them to design the interior for their new Campaign Headquarters in Bruma, Johannesburg, the team had little idea of just how creative they would need to be.

Since its formation in 2000, the DA’s Federal Head Office had been based in Cape Town, however with an upcoming election, they decided to move their operational and political Campaign Headquarters to Gauteng.

Nkululeko House was to be the new home for their large staff contingent – a building in need of a design overhaul that would be offer both maximum productivity as well as an inspiring interior work space.

AB Design’s team, consisting of 7 highly skilled professionals, spent time at the Cape Town Headquarters getting a feel for the office space. They learnt both how the party’s staff complement worked together and what their greatest needs to operate effectively were. The party’s Federal staff structure included:

The team spent no fewer than six weeks in the Block Out phase defining the structure needed in the new Campaign Headquarters. With ten different departments all performing different functions, one of the greatest logistical challenges facing the design team was how to structure the new space, as certain departments needed to be completely separated from one another. AB Design’s team invested time in understanding how every department operated on a day-to-day basis and what elements were crucial for their work spaces in order to function at their absolute best.

One of the greatest challenges AB Design’s team faced was the design and structure of the call centre. The need? To fit 800 employees into a 1000 sq.m2 space. This coupled with the dense layer of cabling and technology linked to routers and USPs required by the call centre meant that the slightest miscalculation could cause costly downtime. The nature of the DA’s work required their services and spaces to have the capability to handle high-pressured deadlines as well as periods of redundancy. The solution? Custom-designed desks complete with two ADSL points providing each employee needed a comfortable work space that came complete with essential services. 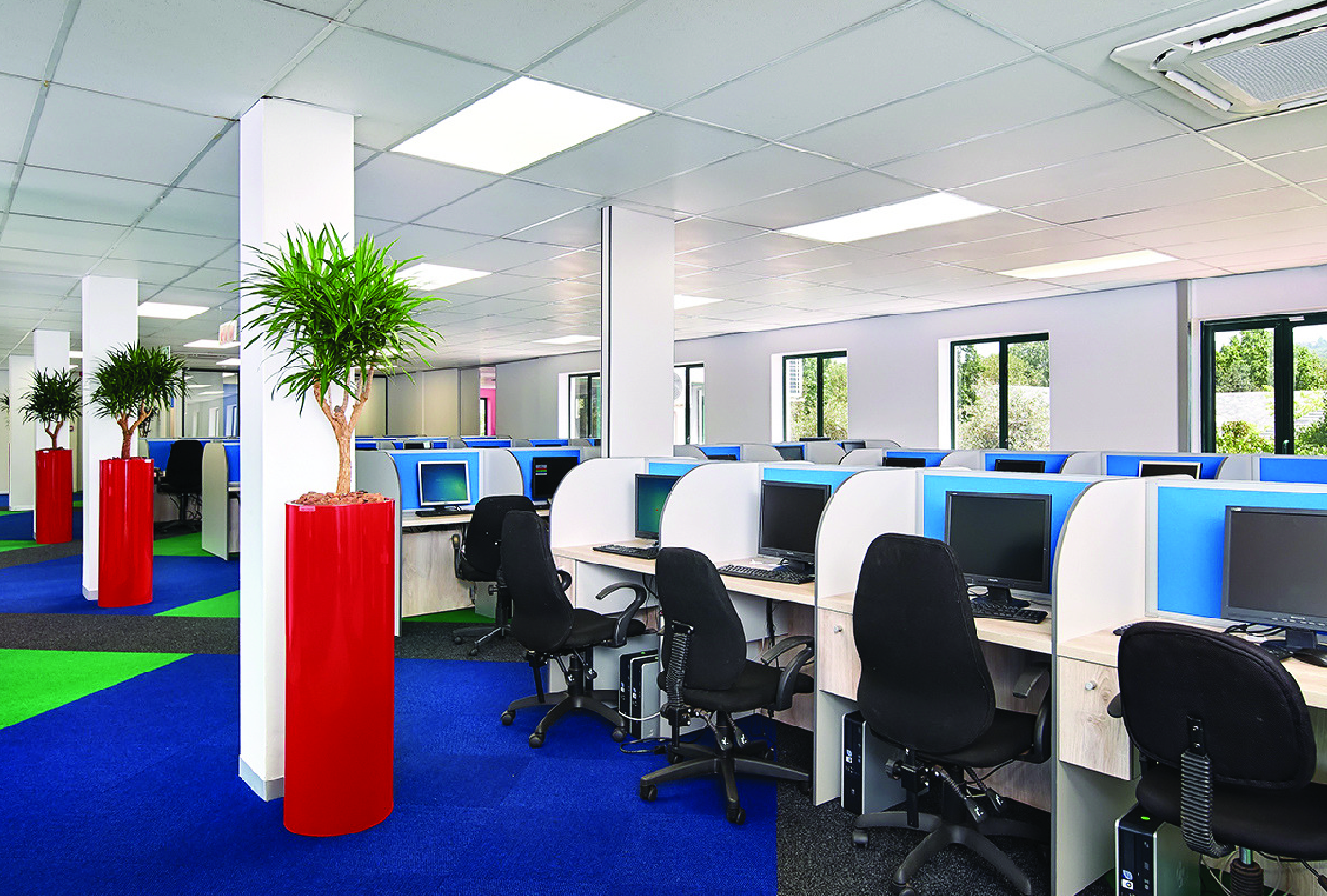 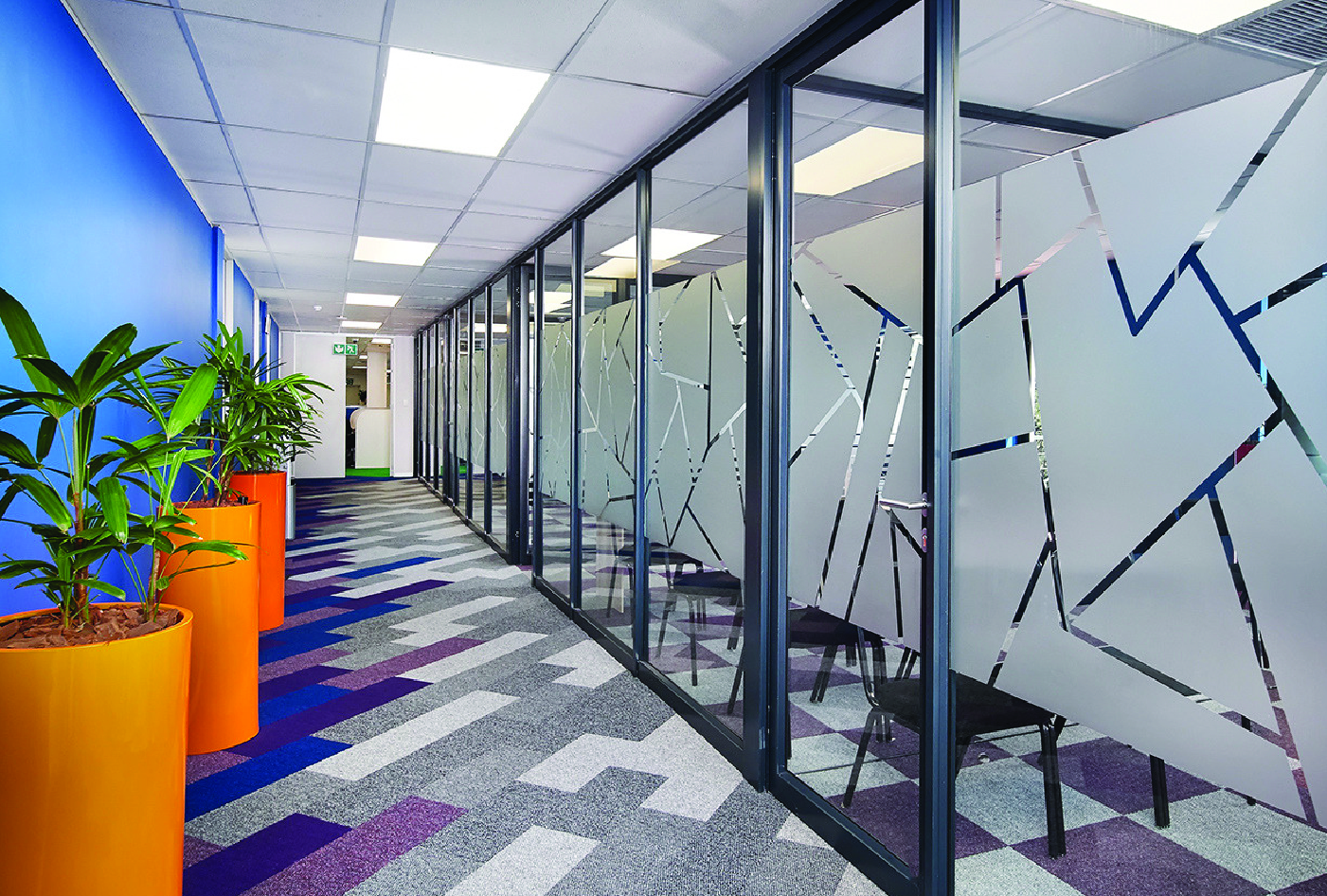 An additional challenge facing the AB Design team was the 15 January 2018 deadline. After a planning process of approximately three months, the team were left with two months in which to implement. The South African builder’s holidays, which fall between 15 December and 15 January, further complicated the process. The secret to their success was a phenomenal team working around the clock to transform the interior office space. The intensive planning period proved vital as it facilitated an efficient workflow which allowed elements such as the carpeting, drywalling and vinyl glazing to be completed one after the other with minimal disruption or delay. The result? A handover ahead of time on 12 January 2018.

Using feedback from the DA employees, AB Design’s team created a series of interior office spaces that catered to the unique needs and desires of each department. A clever use of colour meant that each space was brought to life in a manner that upheld the party’s colours all the while creating a playful feel. A limited budget meant there was no room for creature comforts so instead of large artistic pieces on the walls, the floor became the masterpiece. Colour block patterns were created for each department, giving each space a different feel. Pastels and magentas added a fun element to pause areas, while a combination of blues and greys were used on the walls. Glazing elements in the form of creative vinyl installations provided screening for spaces that needed more privacy.
The ever-changing nature of the DA meant that a flexible furniture solution was needed, and furniture elements throughout were therefore custom-made. This included the series of high-pressure laminate knock-down desks with an integrated power socket that could be moved around. 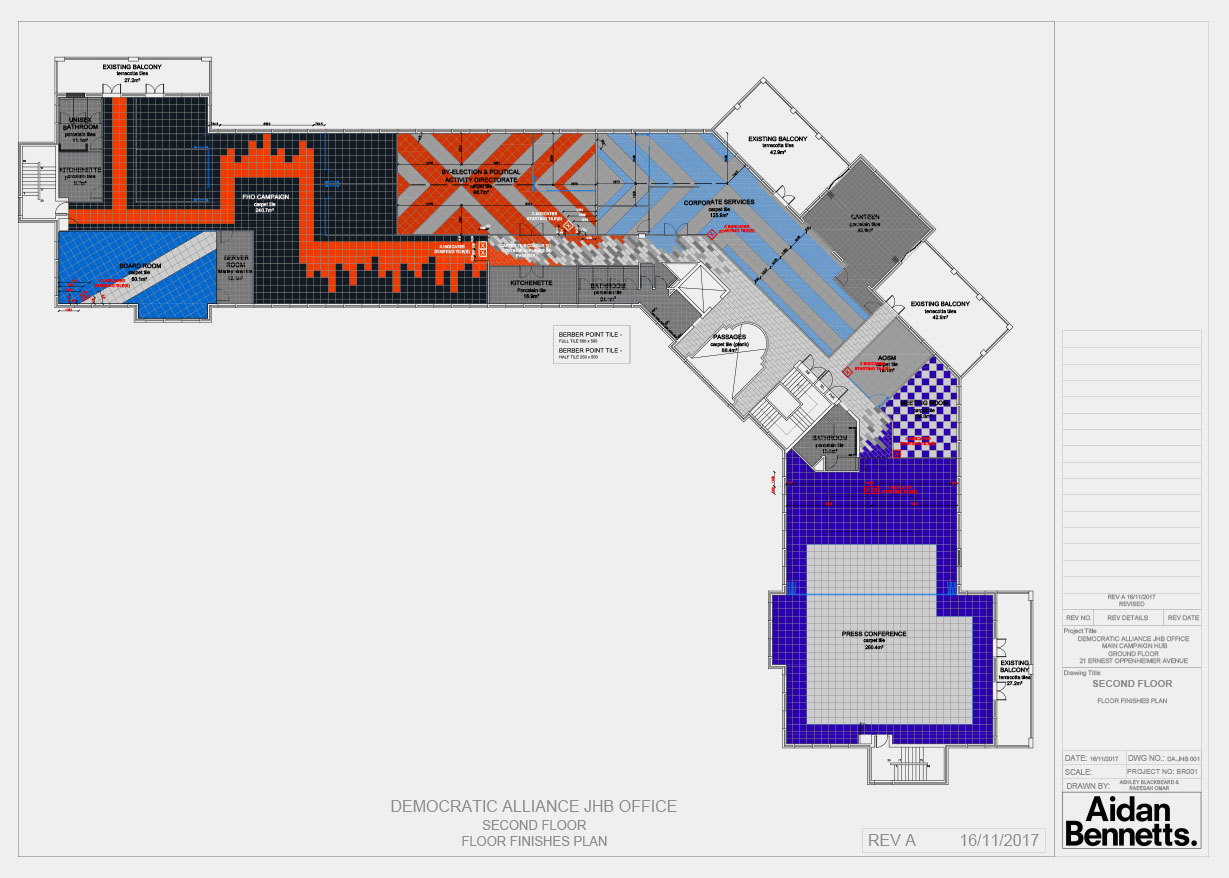 According to Creative Director, Aidan Bennets, AB Design team’s greatest sense of achievement was “going back and seeing the design and space working for that many people.” The design and revamp of the DA’s new Campaign Headquarters was no mean feat, but strategic thinking, sound planning and immaculate execution resulted in an exceptional new space fit for a dedicated work force.